September Dairy Ingredient Market Update
September dairy prices continue to by dynamic as we have seen the following headlines:

Milk production in the US continued to slow in August, only going up 0.8% in August of 2014, compared to the July increase of 1.3%. There were strong milk gains in the cheese making regions within the Midwest, only to be offset by continued declines in the West, led by California, New Mexico and Texas. It is widely assumed that to keep up the domestic consumption growth, milk production should grow anywhere from 1.5%-2.0%. This slowing growth pattern will undoubtedly signal that commodity prices could be going up. We feel that milk production will most likely level off at these current levels (.75%-1.5%), continuing to show small growth through the end of the year and at this level, we would consider milk production ‘neutral’ from a market perspective.

Exports, however, continue to paint a more bearish story. The US exports represent anywhere from 12-16% of all dairy solids it produces. Year to date, the US continues to lose market share to the export market with NDM down 6% YTD, whole milk down 36% and cheese down 13%. Couple this with strong imports compared to last year, (we have seen 15,000 lbs more cheese imported in 15′ vs. 14′) and the picture becomes, perhaps a bit more clear. The difference year over year between the net effects of lower US exports and higher dairy imports calculates out to be almost 2% of total dairy solids. This means that the entire net effect between import/export + production growth is approximately 3%, which is above the domestic consumption and signifies that we are still in a net inventory build situation. This can go on for some time but with inventories already at the high end of historical ranges, milk production has to go down or exports must resume, presumably at lower prices.

EU milk production continues to go up in post quota elimination where they are seeing surprising gains of 2-3.5% on a monthly basis. With recent commodity price increases and some announced milk price increases to some farmers via co-ops, it seems unlikely that EU milk production is going down any time soon, which should surely bring some additional downward pricing pressure to all markets. That being said, when prices are below their historical mean, they tend to want to gravitate closer to that number, and buyers/hedgers have agreed that these recent prices should be locked in and have been buying aggressively.

No other commodity has experienced more volatility than butter in the last 30 days, where we saw CME prices hit a historic high of $3.13/lb only to be dropped to $2.51/lb a week later. U.S. butter stocks, while at a relatively high historical level, were drawn down in August at a huge rate, and commercial availability of butter is scarce causing needy buyers to bid up product only to see the market quickly brought back down to reasonable levels.

Cheese prices continue to show signs of weakness, but overall the market seems to like prices at their current levels. With cheese inventories at historical highs and a slight build of inventories in August versus a historical draw down, many are thinking that cheese will have to go down after holiday buying is complete. This remains, however, a resilient market and like butter, shows to routinely buck historical trends and is highly unpredictable. With cheese premiums starting to erode, we are watching the cheese market closely as this will determine future whey supply and any lowering of cheese production will obviously have an effect on whey volumes and future prices. Dry whey production as a whole is increasing, up almost 10% in August compared to July, as some producers capable of producing WPC are choosing to dry whey powder due to a more favorable return. WPC production was in turn, down over 7%. Buyers of dry whey are recognizing that prices are at historical lows and will be going up in the future as much of the excess inventory seems to be clearing. That being said, it is unlikely that prices would go up significantly due to the low prices of WPC. Buyers of WPC are also recognizing the historically low values present in the market and are attempting to lock in for as long as they can. The aggressive buying is tightening inventory levels, and future prices of Q1 2016 are showing substantial gains compared to spot Q4 offers. As previously burdensome inventory is cleared in conjunction with heavy promotional activity from end marketers, these markets could see dynamic moves as we jump off the lows.

Demand for whey permeate and lactose, each coming off historically low prices, is picking up as heavy demand from feed users in China is spurring aggressive buying action. Although most of production was heavily contracted at lower prices, spot inquiries are noticeably higher. Prices are up 10-20% in October vs. September and with carbohydrate demand picking up steam and less production going on, we expect a further jump in prices by year end, if not in November. As one trader said, “You know if Chinese buyers are calling you asking for firm bids and taking them, demand is good!” 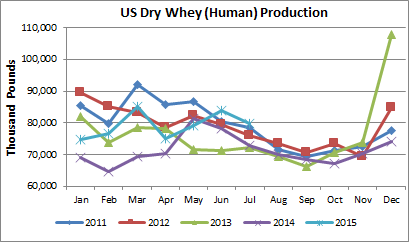 Non-fat dry milk (NFDM) saw its prices continue to rebound as the last three GDT auctions out of New Zealand has seen prices go up almost 50%. Now, as prices for NDM/Skim milk powder from the three major exporting regions of Oceania, the EU and US converge at around $0.95/lb, it seems as if some leveling off is occurring. While the US is losing export market share, production is down and inventories of unallocated product are allegedly low, and sellers are unwilling to sell at discounts. It is also being reported that New Zealand’s production is not what they had anticipated, which will put some emotional gas on this market fire.

It is our view today that NFDM prices have leveled in the short term, but that CME futures prices will carry a heavy “FOMO*” premium for the foreseeable future. Like we have previously stated, the overall market fundamentals, however, are ultimately resting on global milk production, which still seems to say that prices aren’t skyrocketing anytime soon and there is still a possibility of lower milk values to come.

*FOMO= “Fear of Missing out”