May Dairy Market Update
Dairy prices are mostly flat to slightly down as the world wrestles with higher milk production. However, some bullish forces remain.
Here are some recent headlines:
With Europe’s intervention (direct payments to farms, doubling volumes, and allowing producer organizations to enact production limits voluntarily) markets reacted negatively. This can be viewed as slowing the eventual constriction of EU milk supply. Herd expansion seems to be slowing but production per cow is still gaining thus keeping the EU’s YOY Feb ’16 production up 5.7%. Netherlands, Poland, Ireland and Belgium have the largest January YOY expansion, and while Germany and France are still up YOY in January the climb seems to be slowing.
February had US milk production YOY growth at its highest since August ’15. Southwest milk numbers have jumped dramatically after the winter storms. With herds recovering and milk per cow up, New Mexico and Texas are quickly recovering faster than anyone expected and seemed to have very little bullish impact. California milk production continues to be down 92.9 million lbs. (-2.8% YOY), while Wisconsin is up 95.8 million lbs. (+4.4%YOY). YOY slaughter rates are down 3.6% indicating that US producers unwilling to cut production at this time.
New Zealand’s Fonterra Cooperative group reduced its forecast milk price for the 2015/2016 market season to the lowest price since 2006/07. Smaller herds and less supplemental feed puts New Zealand’s milk production forecast 4% lower YOY for the season. NZ dairies operating at below costs will start to constrict supplies.

The US March cold storage report (published April 22- a report that illustrates how much cheese (by type) and butter companies are holding in inventory in the US) had Butter stocks up 8.28 million lbs (3.4%) versus the previous month. Prices paid for cream (used to make butter and ice cream) remain low verses last year and as we head into spring flush (the season where milk production is at its peak). Heavy imports are to be expected through 2016 with the disparity between US and Global butterfat prices. It would not be surprising if next month’s cold storage report shows even more inventory built in spring, with seasonally lower demand. Historically speaking, butterfat has been one of the most volatile dairy markets, as there are only a few big players in the game. 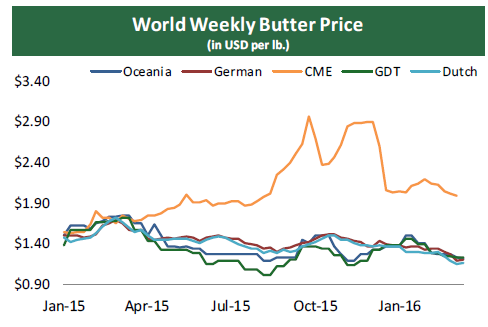 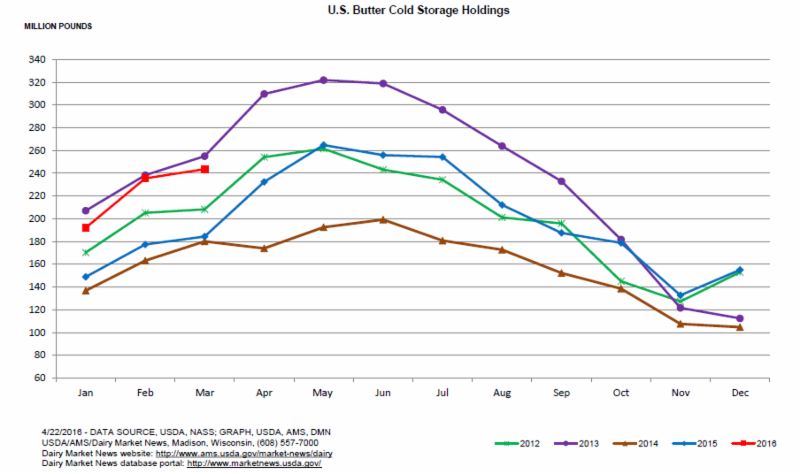 Cheese prices slide lower globally, and US cheese prices have finally succumbed to supply pressure. The CME cheddar blocks fell to $1.2775/lb at the start of May, down from the $1.4680 mark at the beginning of April. This has been the lowest price since March 23, 2010. Since EU intervention only supports milk powder and butter, wxpect milk to flow into these products verse cheese and whey, whenever possible. Cheese imports to the US continue to rise while US Exports decline. Cold storage natural cheese stocks only rose slightly (0.7%) from Feb ’16 to Mar ’16, but inventories do still paint a bearish picture as they are still at all time highs. Since milk production continues to grow in the Midwest we expect cheese stocks to increase accordingly during the spring flush. The cheese milk (Class III) verses powdered milk (Class IV) spread still slightly favors cheese production in the US. Dec’ 15-Feb ’16 total US cheese exports are down 12% while imports for cheese are up 25% in that same time span as Europe and New Zealand push as much cheese as possible into the US.
If cheese prices continue to slide the scenario could equate to less whey proteins on the market as Midwest dairies decide to send dairy cows to beef. Also if butter continues to hold price, and cheese slides lower, we could see some more milk move to butter/powder production verses cheese. Less cheese equates to less whey. Some of these bullish factors have already been witnessed with WPC prices slowly increasing. 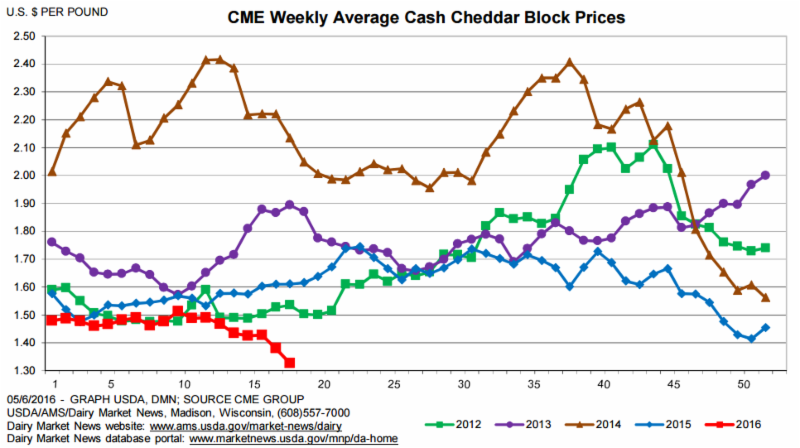 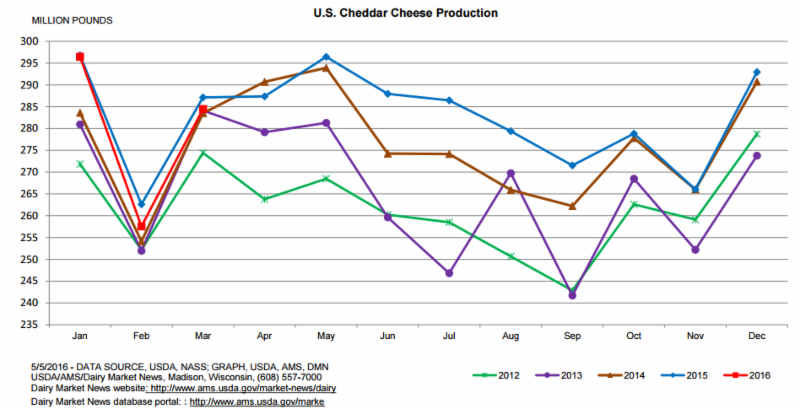 Spot Nonfat dry milk moved up to $0.80- the highest in 108 trading sessions. EU is putting much more of its milk into milk powder as the EU intervention prices are much better than sales to customers. EU intervention is quickly filling.  NFDM production has declined for the past 5 months vs. the previous years in the US. What looked to be a strong start to 2016 Chinese demand turned out to be a false signal; Chinese pull in February did not exceed YOY imports and March ’16 imports where only slightly higher YOY. One other factor that could help US exports on NFDM would be if the dollar continues to weaken. 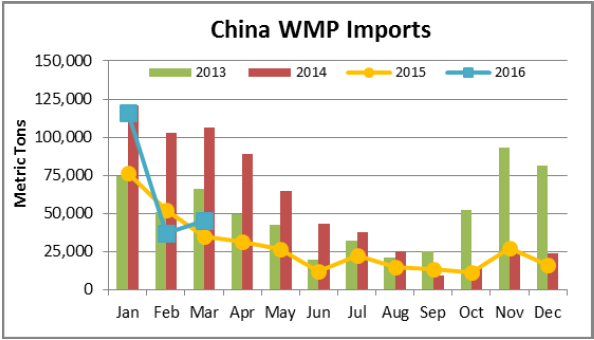 Strong Cheese production will keep a heavy flow of whey products into the market. As mentioned earlier. EUs intervention favors SMP/Butter, not cheese/whey. The world will look for the US to fill the void in supply. We could see whey prices increase into the later part of 2016 and very likely into 2017. WPC80 prices have been stable with slight upward movement in the spot marker. Consumer demand for Whey proteins is strong at the retail level as ready to mix and Ready to drink become more affordable.
If Midwest milk continues to  increase and ends up having a cooler summer, the question remains what form the additional Whey will take- Sweet Whey Powder, WPC 34, 80, or WPI?

Lactose prices increased on strong international demand- bouncing off of extreme lows. If demand stays on this trend, and milk moves away from cheese vats in the EU we could see this bullish trend continue for Lactose and Permeate. If demand stays on pace, expect a slow steady incline in prices throughout the remainder of 2016. We believe that the most recent lactose inventory report has some errors as it showed a 50% increase in stocks.