June Dairy Market Update
Dairy prices may be turning a corner, despite an overabundance of milk and inventories. With depressed global milk prices, we may be at the start of milk production slow down. Exactly when the milk tightens is still unknown.
Here are some recent headlines:
Despite sliding EU milk prices, as well as farmers operating at below cost, milk is still up in the EU. YOY EU production for Q1 of 2016 is 5.8% greater than Q1 of 2015. The USDA updated its EU milk forecast mid-MAY and still believes that 2016 EU milk will only be up 1% overall verses 2015. Clearly there will have to be some major milk contraction later in Q2-Q4 2016 EU Milk to average out at a 1% YOY gain. This would take massive amounts of herd culling (moving dairy cows to beef) to contract the milk supply appropriately- something that should have occurred months ago. Though EU milk contraction could be just around the corner, we will believe it when we see it. This apparent upcoming decline in milk volume does not seem to have a bullish tone, but more of a balanced market.
There is a similar story in the US Milk shed, as milk prices have recently declined as well as dairy cow values. Despite the low margins and unfavorable market dynamics, dairy producers are down 1.5 % YOY cow slaughter in May. More recently, the prices of Springers (ready to milk cows) values are decreasing. As the numbers of milking cows on the market grows there might not be appropriate demand from farmers looking to increase their milking herd. When springers don’t get bought by other farmers, they go to slaughter. This domino effect would lead to a lower overall cow value- which in turn would have banks tightening the amount of credit they can offer to farmers, which could increase farm foreclosures in the upcoming months, as this slow progression can take several months to be brought into fruition, but US milk has been on the rebound, whether or not this holds is still debatable.
In Oceania- both New Zealand and Australia continue to contract their milk supply. Sharp price decreases, unfavorable weather, as well as aggressive culling have led to this. 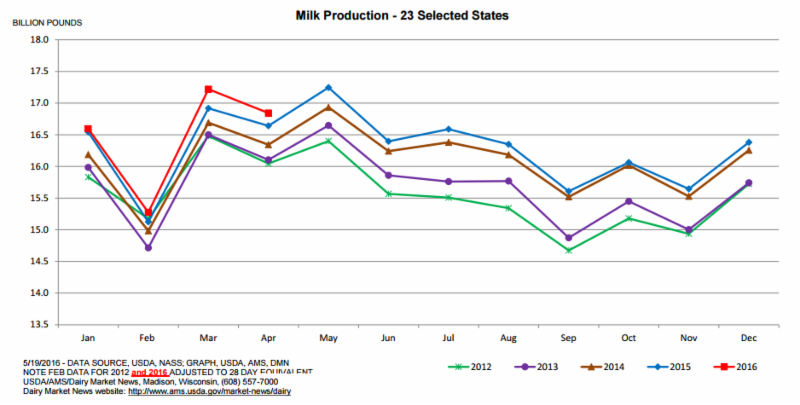 The US April cold storage report (published May 24- a report that illustrates how much cheese (by type) and butter companies are holding in inventory in the US) had Butter stocks up 55 million lbs (22.6%) versus the previous month. Cream demand continues to slump, as well as some milk diverting from cheese vats to butter churns. Heavy imports are to be expected through 2016 with the disparity between US and Global butterfat prices. One bearish butter concern is that current buyers of butter could be using product for later in 2016 and thus the seasonal holiday butter demand is already being filled. This could lead 2nd half butter prices being lower than 1st half which is a uncommon occurrence (see CME Weekly Average Cash Grade AA Butter Prices Graph below). Overall the butter markets it still conflicting without transparent direction. 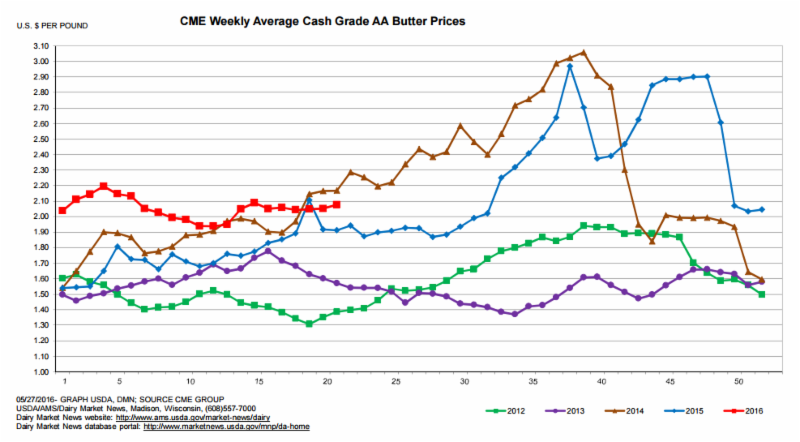 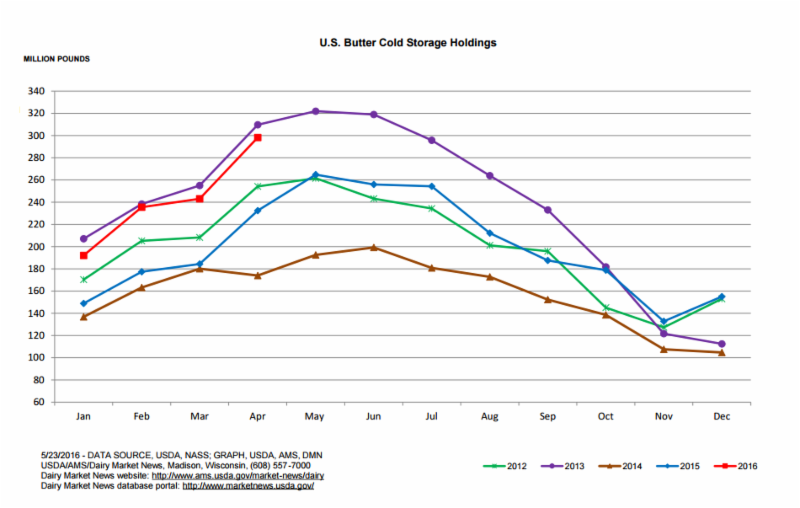 Cheese prices slid lower globally, although US cheese prices seem to have hit bottom and have bounced up from that bottom. The CME cheddar blocks fell to $1.2775/lb at the start of May, but as of June 3rd moved back up to $1.4450. This recent increase in US cheese prices can be attributed to buyers looking for fresh product while most of the massive cheese stocks are aged products. What has driven this recent increase in the European dairy cheese prices could be a similar factor, but it also seems that some of the change is related to a weaker Euro, which makes the commodity price increase to maintain value.
Cold storage total cheese stocks rose (1.9%) from March ’16 to April ’16, as cheese inventories are at a 32 year high of 1.214 billion pounds of cheese. Despite these large inventories, cheese prices have surged. The combination of Grilling season starting, fresh cheese demand, As well as Midwest temperature forecasts reaching mid 90’s this week for the first time this year. Dairy cows milking performance is greatly influenced by weather. When the Midwest heats up, cows produce less milk, and as most Midwest milk goes into cheese, it can trigger a supply shortage driving prices up. The cheese milk (Class III) verses powdered milk (Class IV) spread also favors powder/butter production in the US where in previous months it was the other way around. US cheese markets do continue to feel pressure from international cheese as the US prices are much higher than the rest of the world. US manufactures exported 48% less cheese (46.7 million lbs) in April ’16 than April ’15. Over the same YOY outlook we imported 31.2 million more pounds of cheese in April- largest April volume since 2007. Needless to say there are still bearish factors that could come into play as someone will have to clear inventory as well as a continuing growth in cheese demand.
If Cheese prices continue to hold at the $1.40- $1.50 range due to supply being tighter, we should see whey prices increase accordingly. 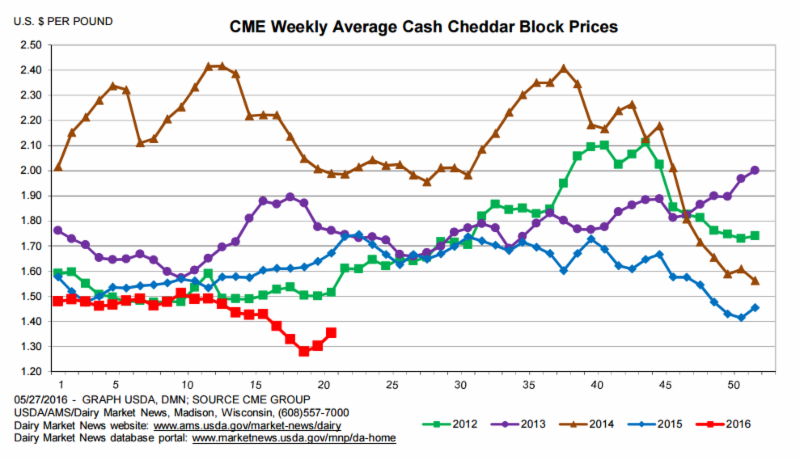 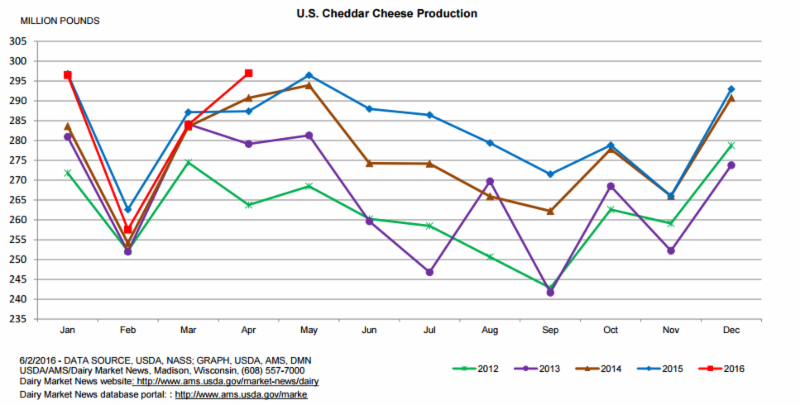 Spot Nonfat dry milk moved up to $0.80 plus- with futures in December of 2016 at $1.03As the EU intervention takes more NFDM we see an artificial supply constraint. News of international contraction of milk also sparks buyers wanting to cover themselves and thus bump up prices. EU intervention is quickly filling. NFDM production has declined January- March vs. the previous years in the US while April for the first time in 2016 is up 1%. Mexico (US’s largest NFDM customer) pulled 18% more in April 16 verses March, indicating that their demand was not temporary.
Whey derivatives continue to gain strength. Recent growth in dry whey interest has allowed buyers to clear some once burdensome inventories. Many ice creams use some form of whey in their formula, and with Ice cream season in full effect buyers are helping demand. With current price US prices making whey more competitive internationally the world will look for the US to fill the void in supply. Infant grade WPCs continue to remain tight and committed. Whey future prices continue to climb in latter half of 2016 and start of 2017. WPC80 and WPI prices have been stable with slight upward movement in the spot marker. Consumer demand for Whey proteins is strong at the retail level as more and more Americans can now afford whey protein powders.

We were correct in believing that the lactose stock reports were incorrect last month. USDAs reports revised the March inventory lactose numbers from 187.4 million lbs to 116.4 million pounds.  Anecdotal demand continues to be strong with large international consumption. Since lactose is a byproduct of high protein whey derivatives- often times with better WPC prices and thus more WPC we could see some downward pressure on lactose prices as more is produced. This extra lactose production could, at best keep Lactose flat in the near term. It may be a foot race as high protein whey and lactose demand both trend upwards.